Your business needs a website. Or you have an older website and you want a modern and responsive website so Google doesn’t punish you in their search rankings. We can build you a website that runs on the powerful and easy to use WordPress platform.

But wait, there’s more! We connect you to the resources you need to build or solidify your brand. From logos to stock photos and videos, search engine optimization, photographers, and even custom merchandise manufacturers and e-commerce. Tech Bandito will help you bring your internet game to the next level! 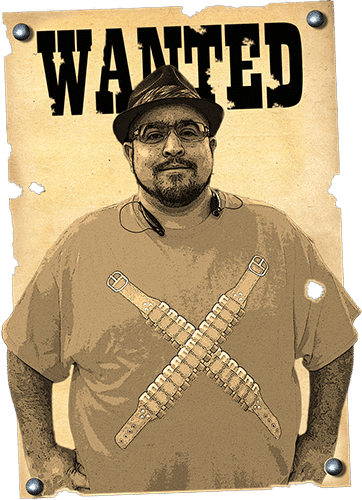 Raul was born and raised in San Francisco and has worked in IT since 1999 for companies including The Geek Squad, Best Buy, CompUSA, Food.com, Wells Fargo, and Genentech. He is also a life long movie nut and home theater enthusiast with a passion for film making. Raul currently lives with his wife and their two dogs as a full time traveling digital nomad in an Airstream travel trailer.

I started deconstructing websites, building my own, and learning web and graphic design. I became a video game blogger running several popular websites, developing relationships with game developers, and schmoozing at industry parties at the video game mecca, E3.

I eventually put websites, and video games, on hold to focus on a new job and screenwriting. But I just couldn’t kick the website bug and found myself consistently working on everything from personal and friend and family sites to company intranet sites. So it made sense to really dive into it when I started Tech Bandito in 2015.

“Raul was very professional and knowledgeable and his customer service and attentiveness were off the charts. Pricing was great as well. I would strongly recommend Tech Bandito for any and all of your tech needs.”

“Raul was easy to work with and I felt very comfortable with his style. He was always clear with me regarding every step he performed and spent time showing me tips to keep things running smoothly. He saved me money and so much future frustration.”

“Raul spent time explaining to me exactly what was going on and patiently answered all of my questions. Raul’s charges were extremely fair and clear. I highly recommend Raul for any tech needs!”

ready for your free consultation?

Read More
Comments Off on taking a travel break

Any cookies that may not be particularly necessary for the website to function and is used specifically to collect user personal data via analytics, ads, other embedded contents are termed as non-necessary cookies. It is mandatory to procure user consent prior to running these cookies on your website.

SAVE & ACCEPT
Go to Top